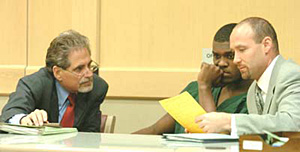 GAINESVILLE -- University of Miami recruit Willie Williams has cleared a major hurdle toward being able to playcollege football this fall.

The prep All-America linebacker on Monday pleaded no contest to felony criminal mischief and misdemeanor battery charges stemming from incidents during a Jan. 30 recruiting visit to the University of Florida. Williams was also placed on probation for one year.
Willie Williams smiles in court Friday, Feb. 13, 2004, in Fort Lauderdale, Fla., after a judge set bond at $2,500 for the top Miami recruit, who surrendered on an arrest warrant for allegedly violating probation. AP Photo Lou Toman.

While in Gainesville, Williams allegedly hugged a female student without her permission, hit a man at a bar and set off three fire extinguishers in his hotel during a span of about five hours.

On Monday, Williams was ordered to pay restitution for damages to a Gainesville hotel, which State Attorney Bill Cervone said has already been done, in the amount of approximately $1,500. Williams also agreed to pay $1,300 for damages to a man involved in a third incident, an altercation between the two in a nightclub. No charges were filed from that complaint.

"I think it's a just result to reflect what he actually did here," Cervone said of the agreement reached Monday on Williams' Gainesville charges.

The final major roadblock to the Carol City High recruit becoming a Hurricane could be settled on June 30, when he has a probation violation status conference with Broward County Circuit Court Judge Michael G. Kaplan.

"Now it's going to be up to Judge Kaplan," said Williams' attorney, Paul Lazarus.

Williams was in the final two weeks of an 18-month probation when he got into trouble in Gainesville. His most recent arrest before the Jan. 30 incident was on July 11, 2002, when Pembroke Pines police charged him with two felony burglary counts, according to the Department of Corrections.

Williams, then 17, was prosecuted as an adult, pleaded no contest, and was sentenced to 18 months of probation and a $353 fine.

"Willie feels relieved that this part is over and hopes he will be OK in Broward," Lazarus said. "He's just hopeful."

Kaplan could sentence Williams to as much as five years in prison or accept that he had made restitution in Gainesville and allow him to go free. Kaplan allowed Williams, who's currently under house arrest, to attend his high school graduation on June 10, as well as his high school prom.

Williams must wear an electronic ankle bracelet and report to a probation officer when he leaves home without advance permission.

His long history of troubles includes 10 other arrests since 1999.

Lazarus said his client had "really turned things around" before the incidents in Gainesville and feels he learned some valuable lessons from his latest brush with the law.

"We have to put our best foot forward," Lazarus said. "We have to minimize the incident in Gainesville and make amends."

Miami has not allowed Williams to enroll, pending the outcome of his legal problems. Lazarus did not want to speculate how his June 30 hearing in Broward County will go, but feels his client has learned his lesson.

"He's certainly learned where the glare of the spotlight shines and how he must conduct himself in the future," Lazarus said.